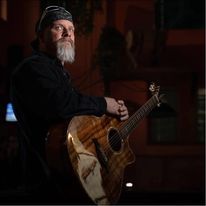 "Blake hails from the gateway to the Niagara Region, born and raised in Grimsby, Ontario.

He is no stranger to live music as both his parents played piano and sang in their church choir. Blake played piano at age four and his first portable instrument was a trumpet in the school band. Growing up, his older brother was in numerous bands and it would seem there was always a jam going on at the Halladay house.

His musical roots run deep and include all genres, but when you catch one of his shows, it's clear that classic rock from the 70's is his biggest influence. Blake's original music borrows from a wide spectrum. You'll hear rock, folk, blues, and country flavours in his songs.

Blake's songs grow from real life experiences and have a passionate quality to them that is rare in this day and age. Be it a song of joy or sadness, all of Blake's music has an emotion that you can feel down deep.

When life throws you a loop, do as he has done, write a song or two and keep the demons at bay, "